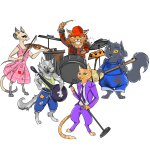 The Cat Came Back

The Cat Came Back has been newly recorded by Ryan Seacat and The Muddy Bottom Tom Cat Stompers. Ryan discovered The Stompers on a recent trip to Louisiana where he was tracing his family’s roots. Said Ryan, “I always felt an affinity for southern food and my favorite movie was Deliverance, so it comes as no surprise to discover I have roots in the south.”

The Muddy Bottom Tom Cat Stompers have long been a staple of the music scene in Louisiana. When asked to define their music they said it was difficult to CATegorize! But their influences include Bluegrass, Catgrass, Catnip and Country!

Check out The Cat Came Back here:

The Cat Came Back is the first of 12 songs to be recorded for the new album. Asked if he was planning on touring to support the new album Ryan Seacat said, “I would love to tour with this group. We would like to play small clubs across the country but my manager wants to book larger venues, possibly as an opening act for Katy Perry or Beyonce! I know Katy is a cat lover and I’m sure Beyonce would love me.”

Spokesmen for Katy Perry and Beyonce have so far not commented.

Other acts that have been mentioned are the Rolling Stones, Elton John, Miley Cyrus, and Andrea Bocelli . Ryan added, “It’s too early at this point to make a final decision, but I would like to play in Times Square on New Years Eve. And although I haven’t met the Pope, I’m sure he would like us to play the half time show during his Christmas Message at The Vatican. Imagine the ratings we could bring him for that show!”

A spokesman for the Pope was unavailable for comment!