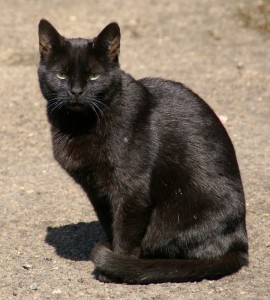 The name on the door was Watson & Sherlock. He thought that was hilarious. I thought it was stupid!

Watson is a private detective. Sherlock is me… I’m the cat!

He says I’m his sidecat! He thinks that’s really funny as well. I ignore him!

Times have been tough lately. The crime rate is down, and after our last case, where Woebegone almost killed the good guy’s mother, there haven’t been too many calls.

Things were so bad he tried switching me to No-Name kibble! So I threw up on his “detective hat” (A fedora in case you were wondering)! After a twenty dollar cleaning bill, he soon realized the error of his ways. I’m back to the good stuff! He’s eating No-Name mac & cheese!

Woebegone is not a very good detective… OK he’s crap! But with a lot of help from me he usually solves the case in the end and everybody is, if not exactly happy, at least mostly satisfied.

Frank L. Whiting, a wonderful cat, a true visionary, an entrepreneur, a mentor, and I might add, very attractive to the ladies, has asked me to write a monthly column for his wonderful magazine – The Cat Mag!

Although I have a very busy schedule I agreed to do it. I would not have done it for anyone else, but Frank is a truly special cat!

So, starting with the premier edition of The Cat Mag, you can ride along with me, and the idiot Watson, as we face excitement, danger and adventure on the mean streets of Toronto!